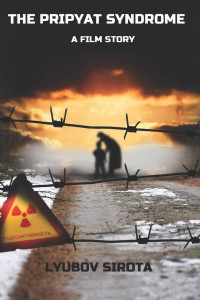 Literally on the eve Day of memory of Chernobyl tragedy 26 April 2012 in first has appeared the opportunity of the edition of my old fiction – film-story "Pripyat syndrome". The book was issued at support of International public organization "PTRIPAYT.com" and a site of city of Pripyat Pripyat.com, which I thank very much for the book and for all selfless work on preservation of memory of Chernobyl catastrophe and our Pripyat!..

First the first edition of the book was published in Russian, then – in Ukrainian. And in 2013 in English on Amazon.

In this book telling about the tragic destiny of the young woman – inhabitant of Pripyat, desperately struggling for a life of the son, many of the twists and turns of the first days and the first years of Chernobyl tragedy are displayed vividly and precisely.

So, now again anybody who want to can to have it and to read.

!!! A small fragment from the book "Pripyat syndrome" in English translation by Natalia Ryumina !!! The Video Review of the book by Lyubov Sirota "Pripyat syndrome" in Russian see here:

The audio version of the book by Lyubov Sirota "Pripyat syndrome" in Russian see here: http://pripyat.com/news/11-07-27/audioversiya-knigi-lyubovi-siroty-pripyatskii-sindrom.html